What You Need To Know…

1. Hamstring strains are some of the most common injuries in sport and training. But even more concerning over 1/3 of people with hamstring injuries will have a re-injury, and most of those will happen mutiple times.

2. There are many reasons for why your hamstrings are chronically injured, including lack of flexibility, muscular control and your lack of an effective and efficient dynamic warm up.

3. Your “tight” hamstrings are only a part of the problem when it comes to protecting yourself against injuries. You not only need functional length of the hamstrings, but the ability to control forces and ranges of motion effectively.

4. Protecting yourself from hamstring strains isn’t rocket science. Use these five exercises to prehab or rehab your hamstrings to avoid pain and injuries while also improving performance.

Have you ever strained your hamstring before? You’re not alone! Hamstring strains and injuries are among the most common acute musculoskeletal injury in the United States. Athletes who participate in track and field, soccer, and football are especially prone to these injuries given the sprinting demands of these sports. One study found that over a 10-year span in the NFL, the occurrence of hamstring strains was second only to knee sprains. The average number of days lost for athletes with hamstring strains ranged anywhere from 8 to 25 days, which equated to missing up to four NFL games or 25% of the season. Even more concerning is that re-injury rates on hamstring strains are extremely high, especially during the first two weeks after return to sport. In fact, over 1/3 of hamstring injuries will reoccur during this time.

#1 You Can’t Control Your Hamstrings When They Lengthen

The hamstrings are a group of muscles that consist of the biceps femoris (long head and short head), semimembranosus, and semitendinosus. Hamstring injuries occur most commonly in the terminal swing phase of the running cycle. During this phase, the hip is moving into flexion (bending) while the knee is moving into extension (straightening). The hamstring muscles are responsible for controlling these particular motions by ECCENTRICALLY lengthening and decelerating the limb. (Most hamstring injuries happen during this decelerating phase of runnnig)

The biceps femoris, in particular, incurs the greatest musculotendon stretch during the late terminal swing phase of gait and is more commonly injured than the three other hamstring muscles. Thus, adequate eccentric hamstring strength is extremely vital in preventing hamstring strains. 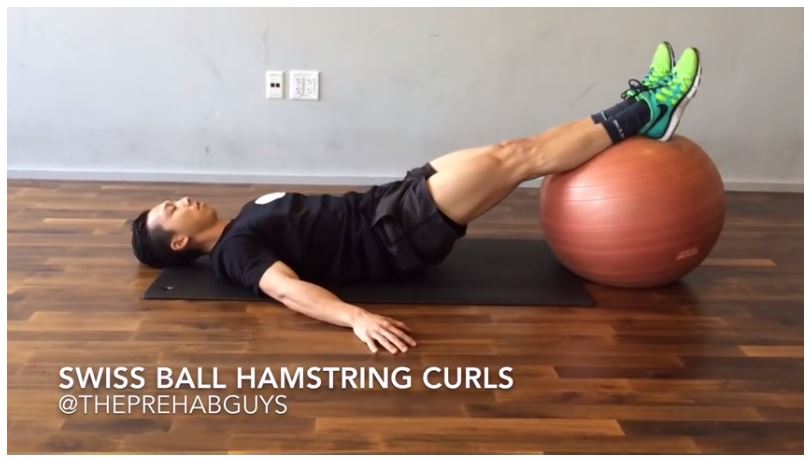 The first exercise is a great bodyweight  routine that works on developing ECCENTRIC hamstring strength. The first rep is a pure eccentric hamstring exercise. First bridge up, then SLOWLY CONTROL rolling the ball out away from your hips. Slow and controlled is the most important aspect of the exercise. The second rep is a combined eccentric + concentric rep. The last rep is a progression where you don’t use your hands for stability, which is extremely difficult! I know they look easy, but give them a try and your hamstrings will be begging for mercy!

The best evidence supporting decreased hamstring re-injury is the incorporation of eccentric hamstring exercises. Researchers have determined through isokinetic testing (via high-tech research laboratory equipment) that a strength imbalance ratio of > 20% between eccentric hamstring force production and concentric quadriceps force production resulted in a 4X increase in risk of hamstring injury compared to a normal strength profile ratio! THIS IS HUGE FOLKS.

Many authors suggest that the hamstrings must be strong enough to eccentrically control and offset the concentric action of the quadriceps during late terminal swing phase. You have two big groups of muscles (hamstrings and quadriceps) on opposite sides of the knee joint. When one muscle (quadriceps) fires and begins moving the knee into extension, what’s going to stop the knee from going into hyperextension? Muscle-wise, that would be your HAMSTRINGS. If your quadriceps are too strong—or hamstrings too weak, rather—when you forcefully move into extension, you won’t be able to control the motion, resulting in a hamstring strain. 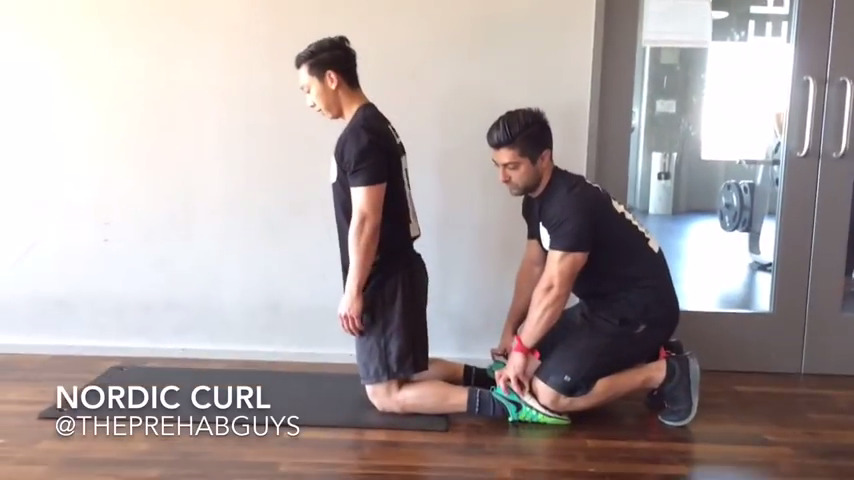 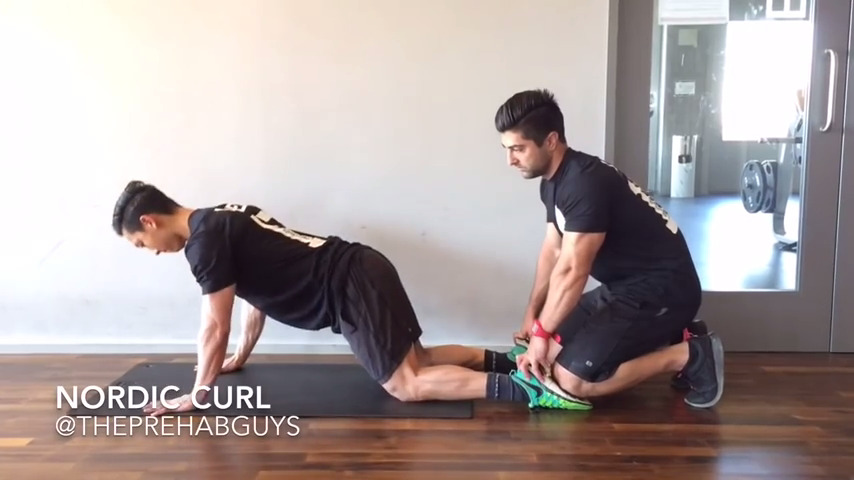 The Harop Curl is an advanced eccentric hamstring exercise that should be set as a goal to really bulletproof your hamstrings. To work up to the Harop Curl, use your arms to slowly lower yourself to the ground and to help you push up and incrementally reduce how much you depend on your arms.

#2 You Have Limited Hamstring Mobility and Flexibility

After a hamstring strain, scar tissue will inevitably develop. Inflammation and tissue remodeling can even be seen on an athlete’s MRI after returning to sport completely symptom free. Scar tissue is much stiffer than the normal contractile tissue it replaces, thus altering the biomechanics of the muscle itself. This biomechanical change also shortens the length at which the hamstrings can generate their highest peak force. This means that the hamstrings are now WEAKER at their maximum length, which is the exact opposite of what we want. So how can we improve the extensibility of the hamstrings and restore an optimal peak force musculotendon length? Stretching! 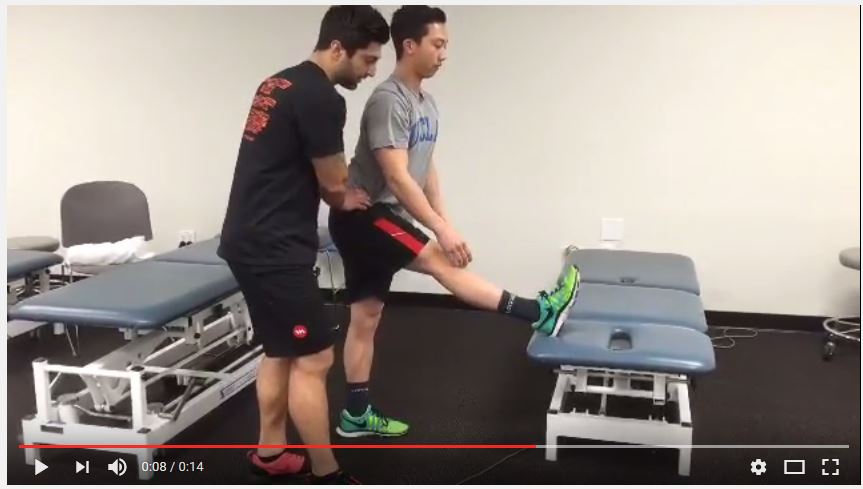 There are many different ways you can stretch your hamstrings. Here we’ve demonstrated a standing version but you can also sit on the edge of a chair just the same.

#3 You Have Tight Quads and Hip Flexors

You’re probably thinking, “What does limited quadriceps flexibility have to do with increasing my risk for a hamstring strain?” Imagine the late terminal swing phase of running, when one leg is out in front of you (hip flexed and knee extended) and the other leg has just pushed off from the ground behind you. If the quadriceps on your back leg have limited flexibility, if can potentially put you at a greater risk for a hamstring strain on the CONTRALATERAL (opposite) side.

The leg that has just propelled you off the ground during running is in knee flexion and hip extension – both positions that maximally lengthen the quadriceps. If the quadriceps (i.e. rectus femoris) has limited flexibility, it can pull the pelvis into ANTERIOR PELVIC TILT. This contralateral anterior pelvis tilt can translate to the ipsilateral pelvis, placing it into anterior pelvic tilt as well. This can place excessive stretch/lengthening on the hamstrings of the ipsilateral side as they attach to the ischial tuberosity. This excessive lengthening, without adequate eccentric control or adequate hamstring flexibility, can be a recipe for disaster and can increase your risk for a hamstring strain 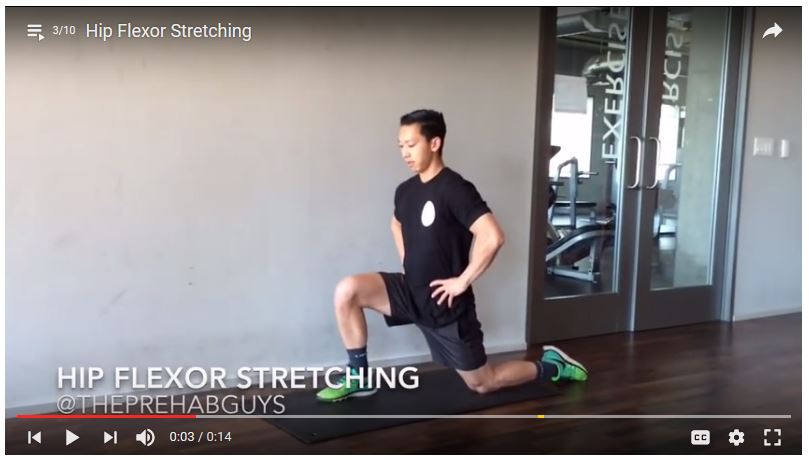 The first stretch targets the 2-joint hip flexors (e.g. rectus femoris). By flexing the knee, we’re maximally lengthening the rectus femoris and thereby giving it the greatest stretch possible. When we stand up with the knee extended and straight, we are putting the rectus femoris in a slackened position and are therefore primarily stretching our 1-joint hip flexors (eg iliopsoas). It’s important to first maintain a POSTERIOR PELVIC TILT to actually target your hip flexors. Most people forget this vital step. Remember: lunging forward without first posteriorly tilting your pelvis accomplishes absolutely nothing.

#4 You Don’t Know How To Properly Warm Up 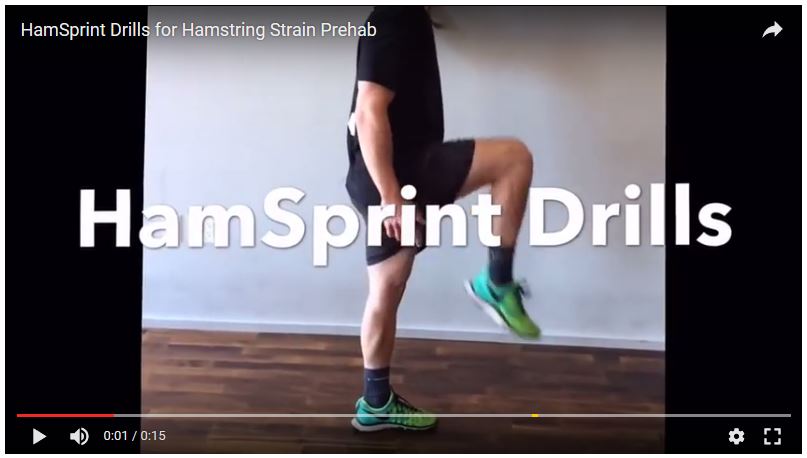 Follow this link to watch this video on dynamic warm up.

“Proximal stability promotes distal mobility.” This adage holds true for every body region and the hamstrings are no exception. Neuromuscular control of the lumbopelvic region is absolutely imperative to all lower extremity biomechanics, especially to optimal hamstring function during normal sport activities.

Improving performance of the proprioceptive system at differing joint angles and body positions is key. This can be accomplished through technique-based exercises, balance drills, and plyometric exercises. A neuromuscular control program “aims to stimulate the proprioceptive pathways and the processing of such information, with planned and unplanned movements, and, through repetition and practice, alter the neuromuscular response and allow adaptive changes to occur.”

A 2009 study by Cameron et al looked at the effects of the “HamSprint Drills” warm up routine on lower limb neuromuscular control of Australian Rugby players. They found that after 6 weeks of performing the HamSprint drills, the players in the intervention group significantly improved their kinesthetic body awareness and lower limb neuromuscular control in comparison to a usual warm up of stretching and running. The HamSprint Drills were all specifically tailored to the improvement of running technique, coordination, and hamstring function. They included movements like high knee marching, ankle pops, leg cycling, quick support drills, pawing, falling starts, 3-point starts, and squat jump and goes.

Optimize your movement system and rehab your hamstrings to lower your risk of a hamstring train. Modifiable risk factors are just that – modifiable – so do everything you can to train smarter by incorporating some prehab into your workout routines.

Thanks to Dr John Rusin at https://drjohnrusin.com for a great article and the prehab guys at https://www.facebook.com/ThePrehabGuys for the pictures and video